Most likely as early as in the 11th century, a settlement called Brod or Brodek (which translates as ford in English) was founded along the trade route near a ford across the Jizera River. In the middle ages, iron ore used to be mined and processed in the surrounding areas and eventually, the town was named Železný Brod (iron in English). In the late 17th century, the town was granted the right to hold an annual market and fair and soon became the economic centre of the entire sub-mountain area. Crafts flourished in the town and the 19th century saw the development of the textile and glassmaking industries. In the early 20th century, Železný Brod became an important glass and custom jewellery manufacturing centre.

Kostelní vršek (Church Hill) (2) is a remarkable late Baroque compound. The Church of Saint James the Greater from the second half of the 18th century is located in Malé náměstí (square) on the site of a former wooden church. Next to the church is a single storey parish building from 1723, the first walled building in the town, and an ossuary (1765). Behind the church is a sandstone conciliation cross. The church is accessed by a stone staircase, lined with late Baroque sandstone statues of Saint Ann, the Virgin Mary of Karlov and Saint John Nepomucenus. The original belfry of Železný Brod (1761) burnt down in a fire in 2007. It was restored in 2008.

A set of folk architecture structures from the 18th and 19th centuries is located in the district of Trávníky, a part of Železný Brod. It is a unique example of purely rural development located in a town. Most houses were built by minor craftsmen and they usually had one room and a cow shed or a pantry. The houses used to be named after their owners. A marked trail that will take you to the most interesting houses runs through Trávníky. Fountains – a sandstone fountain with a statute of the Immaculate Virgin Mary at Velké náměstí (square) was erected around 1827. One year later, a smaller fountain with a stone column bearing the town coat of arms was added to Malé náměstí (square). Another fountain was built in Trávníky in the same year.

is referred to as the “humpbacked” house. Picturesque row log houses with gables facing the street are a typical, yet very rare example of older housing structures.

– house No. 242 dates back to the 19th century and is exceptional because of its main gable and the artistic rendition of the window band with flat balusters (referred to as a cat walk). This architectonic feature is very rare in Železný Brod and can be found in only two buildings.

– house No. 262 is referred to as the town hall of Trávníky. It is a unique patrician walled house with a mansard roof and Empire façade. There is a sandstone fountain from 1828 near the house.

The Municipal Museum is located in the building of a former municipal savings bank that was built in 1936. The façade of the “Klemencovsko” log patrician house (1792) that used to stand in the location was incorporated into the building.

Běliště is the largest and most beautiful folk architecture structure of Železný Brod. This two-storey semi-log building (1807) is a unique example of local folk architecture. It houses the ethnographic exposition of the Municipal Museum. The access road is decorated with three sandstone statues from the second half of the 18th century.

The Chapel of Saint John Nepomucenus on the Desert

The Chapel of Saint John Nepomucenus on the Desert was erected by the Count of Des Fours in 1701–1775.

Šibeňák Hill – the remains of this former execution site are found on a hill above the town; today you can enjoy a panoramic view of the town.

Extended office hours for some agendas:

WHERE TO FIND US 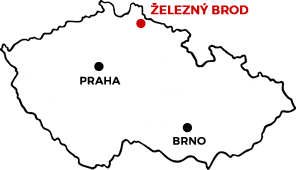 Go to a more detailed map

We use cookies to improve our services. Read information about how we use cookies and how you can reject them by setting your browser.